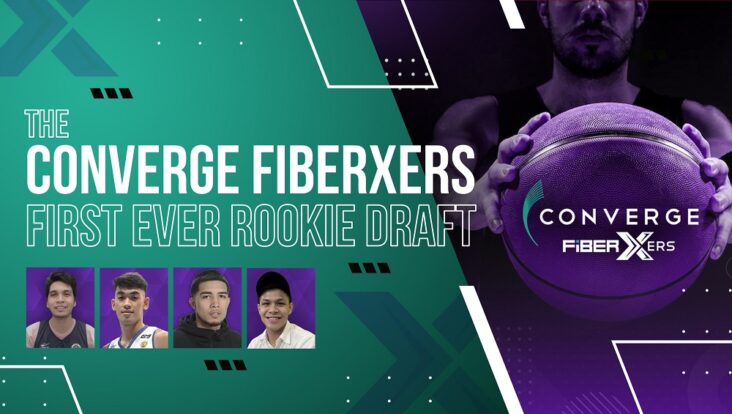 It is the moment we have all been waiting for! Out of the 66 players eligible to be drafted in the 2022 PBA Draft, the Converge FiberXers have chosen four rookies to the team. The FiberXers inherited the draft picks from Alaska Aces. These are the third, fourth first-round picks for the coming 47th PBA Season, and the third pick for each subsequent round. Jeo Ambohot, Justin Arana, Kameron Vales, and Jose “Jollo” Go were chosen in the May 15 draft.

Jeo Ambohot is a 6’7” Letran alum who averaged 10.56 points, 9.78 rebounds, and 1.11 assists, leading the Letran Knights in yet another NCAA victory. Ambohot also took part in the Maharlika Pilipinas Basketball League Invitational.

Justin Arana is a 6’6” center from Arellano University. He is one of the top players other teams have been eyeing due to his size and skill. In the NCAA, he averaged 14.8 points and 17.1 rebounds. He was also selected for Gilas Pilipinas this year.

“I’m really happy and excited to play for Converge FiberXers,” Arana said after being picked. “It has always been my dream to play in the PBA, so I’m very thankful for the trust given to me by the team.”

Kameron Vales, meanwhile, is a 6′ guard who played for the University of Regina, Canada. He had a short stint in the 2020 PBA D-League Aspirants Cup.

“I’m super thankful for management and the coaches for picking me and giving me a chance to play for them,” said Go. “I feel super blessed that I was picked by the FiberXers. For sure, I’ll be giving my 100% with the team.”

“We are very pleased that we managed to get Justin and Jeo in the first round of the draft,” said Converge FiberXers Board Governor Chito Salud. “They were at the top of our wishlist, and having them on board will help us start strong in the season. Kameron and Jollo were also picked for their talents and potential. I can’t wait to work with all four of them in the coming days.”

Head Coach Jeffrey Cariaso was also very happy with the result of the draft. “We’re excited to get back to work,” he said. “There’s a reason why they were drafted and chosen. They will come in and bring their best, and with the right mindset. I want them to understand that they are part of a team now. Nothing beats hard work, and being a team that works together. That’s what I want to focus on.”

Converge FiberXers was able to retain most of the Alaska Aces players after their acquisition of the team. Jeron Teng, Taylor Browne, and Ben Adamos were initially carry-overs from the acquisition, and former Aces Allyn Bulanadi, Mike Di Gregorio, RK Ilagan, Kevin Racal, Alec Stockton, and Mike Tolomia soon followed.